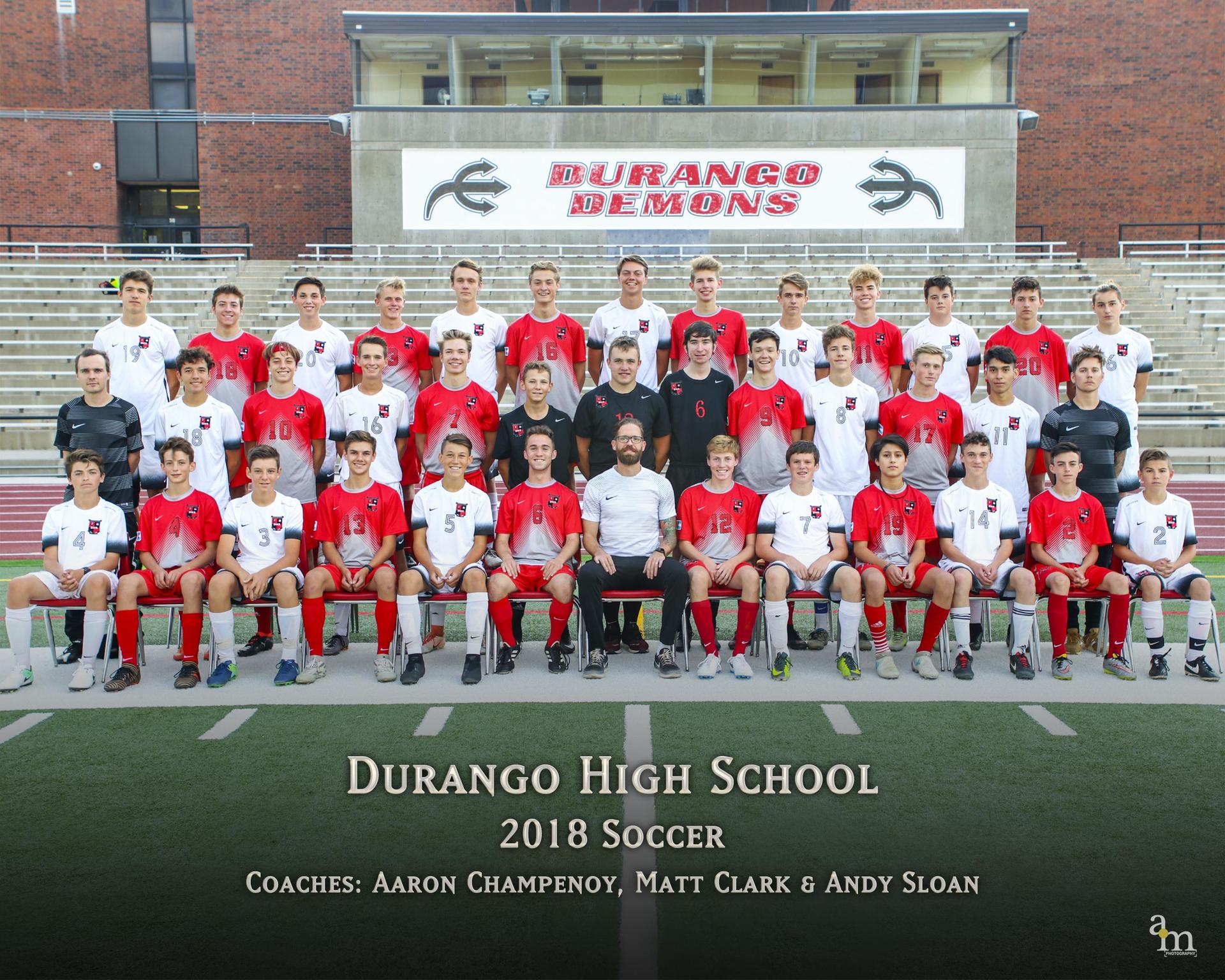 Durango, CO – The 2018 Durango High School boys’ soccer team was a year of new beginnings. The Demons posted the second best record in school history with a mark of 14-2-1 overall and went undefeated in Southwest League play at 7-0-1. This was the fourth Southwest League title in the past 5 years and 10th straight season qualifying for the Colorado State Tournament and wrapped up the regular season at #2 in the CHSAA polls.
The Demons dominated the region with individual honors producing the Southwest League player of the year, 2 all-state players, four first team all-league players, two second team all-league players and 15 Academic All-State honorees.    “It was a great season for this group of young men but definitely not how we hoped to end the season. These guys came together and grew into one of the top team in the state this year,” said first-year head coach Aaron Champenoy. “The accomplishments that were achieved on the pitch, in the classroom and building a strong culture were a direct result of the hard work and dedication every day as a program.”
“I wasn’t sure what to expect from this group when I first arrived. We clicked early on in preseason and believed in one another. The staff was tremendous working every day to build strong relationships with a group of talented student-athletes. We strived to be the hardest working program every training session. The results showed up on game days. Now we will set our off-season goals and expectations higher and try to get 1% better everyday”

THE DEMON WAY  The Demons goal to be one of the strongest boys soccer programs in the State, but more importantly be one of the best groups of young men they can be.

A team motto of "one team, one family" resonated all season and was felt by every opponent. When the Demons stepped out onto the field, it was not just 11 guys in the same jersey; it was an entire program that faced the opponents. Statistically, Durango known for its offensive weapons only allowed 1.059 goals against a game and in the process became one of the top defensive teams in the State.
"We took pride in being really well organized on both sides of the ball," said Champenoy. "We stressed that everyone defends and works in transition. It’s always about outworking the opponents I transition, getting organized and having shape on both sides."   The Demons garnered a No. 4 seed in the CHSAA RPI ranking going into the State Tournament. Durango appeared in the polls throughout the season, climbing as high as #2 in the State.

HONORS AND AWARDS  Individually, the squad collected numerous honors on the year and this was a testament to the team as a whole.    "The individual honors are honors for the team," explained Champenoy. "The well-deserved honors received speaks volumes to this program."    Senior winger, Logan Fullington was honored as the Southwest League Player of the Year. He earned First Team All-Southwest League and Honorable Mention All-State accolades. He was also named DHS Boys Golden Boot award for most points with 13 goals and 11 assists for 37 total points.

Junior central mid-fielder, Leland Heinicke also collected First All-Southwest League and Honorable Mention All-State honors. Heinicke led the team with 14 goals on the season and was name the DHS Boys MVP for his dominating play in midfield on both sides of the ball.

THANK YOU SENIORS  This senior class is part of a group that helped the program to a four-year record of 54-11-4 with a winning percentage of 86% including an impressive 14-2-1 finish this 2018 season, ended the regular season ranked of #2 in the State and a #4 seed in the State Tournament.

"It’s not easy to come into your senior year with a new coach you aren't familiar with and knowing things will be different than expected. It is their team to lead and I asked a lot of this group of seniors,” Said Coach Champenoy.  “I had new ideas, new tactics, and more unknowns I hoped and expected they would take. I asked them to trust me and to buy into what I was going to bring into the program. I told them I would give them everything I had as a coach, and asked for them to do the same for me as players and leaders. They did just that, they bought in and took the rest of the team with them.”

Champenoy added, “I can’t thank this group enough for helping create such a smooth transition pushing this team to a great season. I couldn't have asked for a better group to start with. I’m Proud to be called your coach.”

2019 SEASON OUTLOOK With a program roster that included 20 freshmen and sophomores, the future is bright for the Demons, especially with six contributing to the varsity team in 2018. Paired with the returning starter and leadership of upperclassmen Leland Heinicke, Andrew Saddler, Corbin Miller, Durango is poised to push the standard.    "I am excited for the future," said Champenoy. "We return a lot of quality players and we have another incoming class of good young men with the right character and ability. The off season is essential for the players and staff to continue to develop and work hard in key areas while we continue to move the culture in the right direction."   "We will continue to raise our standard in everything we do. It is essential that we stay hungry to achieve our goals but stay humble in our pursuit to become the best version of DHS Boys Soccer we can."   The program will return to work on building upon this year's achievements.  "We cannot wait to get back together and start our journey for the 2019 season."

The Demons (12-1, 6-0 5A/4A Southwestern League), ranked No. 2 in the Colorado High School Activities Association’s latest Class 4A poll, and No. 4 RPI, recorded four corner kicks the first five minutes of the match until senior forward Lance Townsend found the game’s opening goal in the sixth minute, when he split two defenders and fired a shot into the bottom right corner to give DHS a 1-0 lead. Townsend added his second goal of the game three minutes later. Jack Beattie fed Townsend, and he sprinted past Central’s defense and calmly put it away to give the Demons a 2-0 lead. 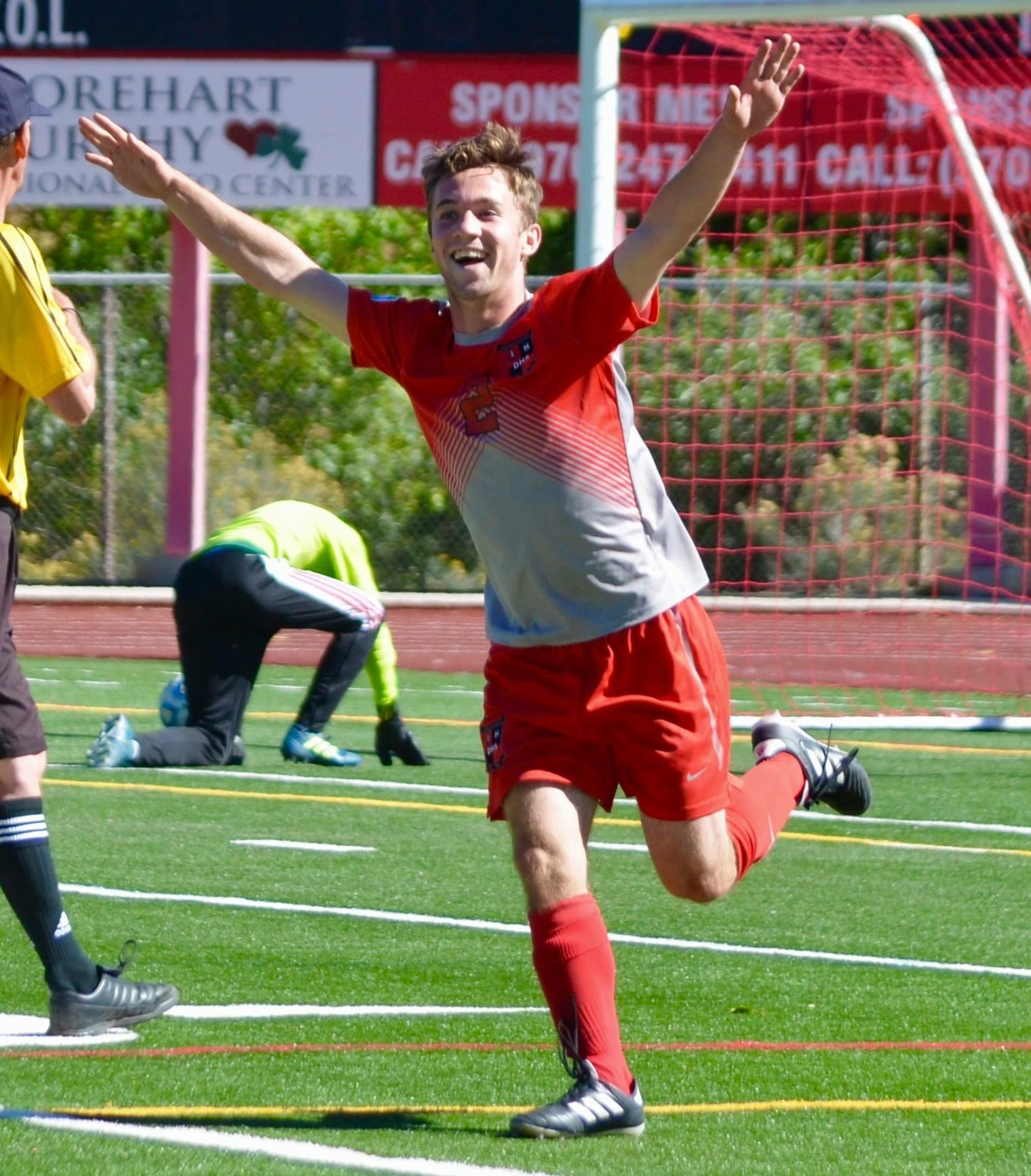 10/1/2018 Match Day 12 Recap:
Durango vs. Montrose HS Win 5-2 and move to 11-1 on the season.
The Durango High School boys soccer team proved how many offensive weapons it has in a 5-2 win against 5A/4A Southwestern League rival Montrose on Saturday afternoon at Durango High School, as four different Demons found the back of the net. 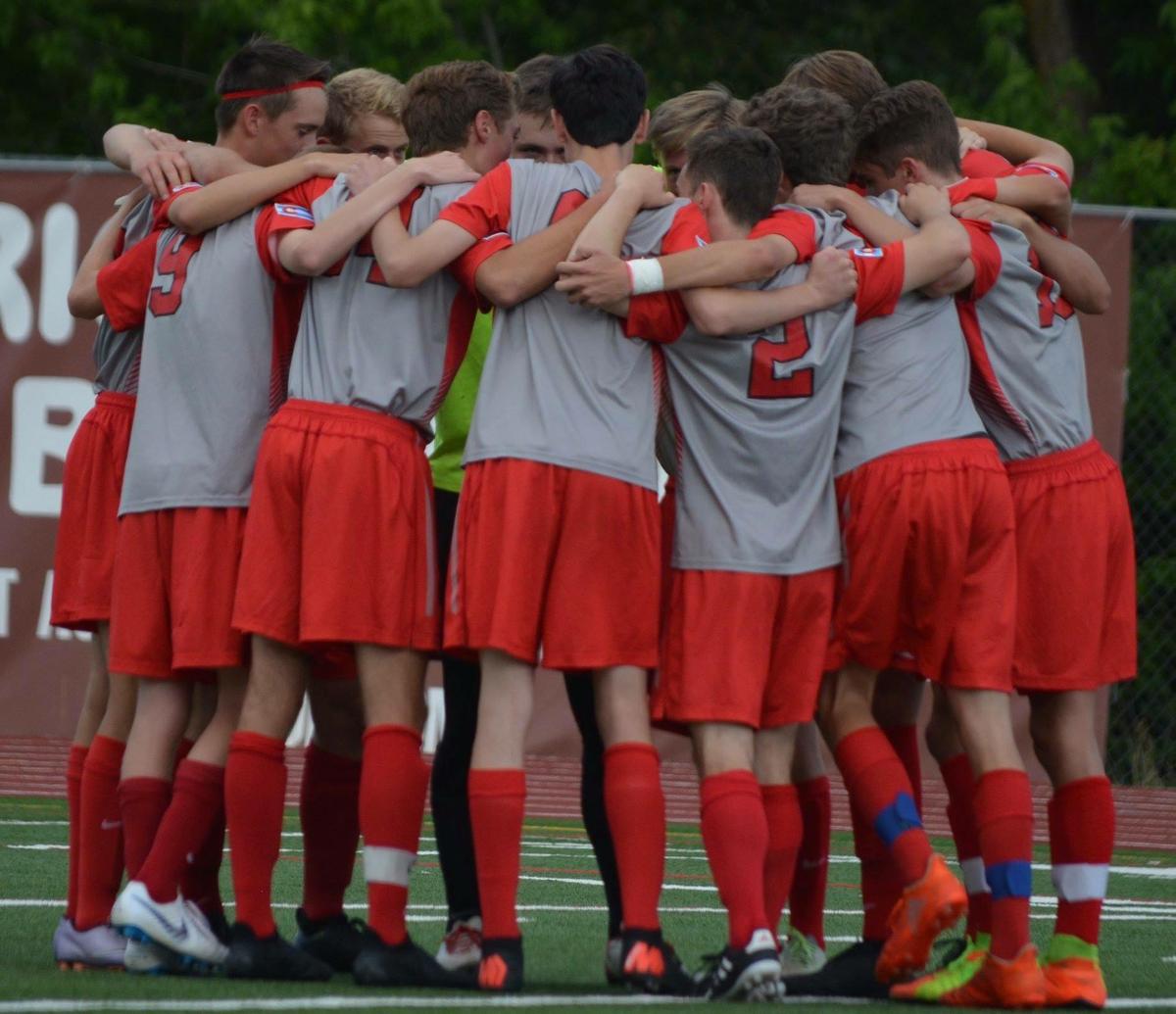 9/5/2018 Match Recap:
DHS Boys Soccer defeated Central High School(Grand Junction) last night 10-1 improving to 4-0-0 now on the season. Braden Lyons got the Demons started early in the first half with his first two goals of the season while Leland Heineke continued his scoring ways notching his 6th of the season. Logan Fullington led the way with 4 goals and 2 assists earning him "Man of the Match" honors. Caleb McGrath allowed one goal from a penalty kick and ended the match with 6 saves.
Next for the Demons, they travel to the Front Range to take on Evergreen High School on Friday 9/7 at 3:30pm JV at Evergreen High School and 5:00pm Varsity at Lakewood Memorial Field. The Demons will then face The Academy on Saturday 9/8 at 11:00am JV and 1:00pm Varsity at The Academy High School.
8/28/2018 Match Day 3:
DHS Boys Soccer.
Come watch your Demons take on Farmington High School at 3:00pm JV, and 5:00pm Varsity at DHS Stadium.
The Demons, 2-0-0, enter the match ranked 5th in this weeks polls after defeating then #9 Battle Mountain and Glenwood Springs in their opening weekend.
8/22/2018 Game Day Count Down...
DHS Boys Soccer will open the season on Friday, August 24th vs. Glenwood High School.
Varsity vs. Glenwood High School 4:00pm DHS Stadium
JV vs. Glenwood High School 6:00pm DHS Stadium